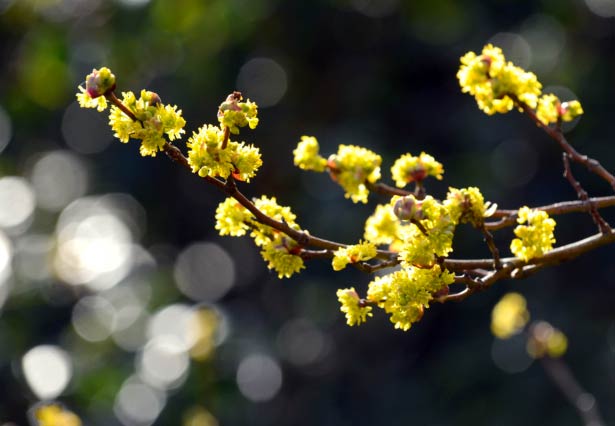 Individually, the flowers of the blunt-lobed spice bush are not a lot to look at. However, gather them en masse on bare branches in late winter under a dull sky, and the effect is stunning.

Lindera obtusiloba is a large, spreading, multi-stemmed shrub. The grey branches support the myriads of small bright yellow, star shaped flowers in late winter or early spring. The leaves which appear after flowering are large, 3-lobed and bright green. Being a member of the laurel family, it contains high concentrations of essential oils which make the leaves and stems aromatic. Autumn sees the foliage turn the most delicious golden yellow, ensuring the plant stands out like a beacon in the border.

Lindera is dioecious – the male and female flowers are produced on separate plants. Willow, ginkgo and poplar are other examples of this. Male flowers are larger and showier than the female, which will produce red to black fruit in autumn if there is a nearby male to pollinate it.

Native to open woodlands in Japan, China, and Korea, it will grow in part shade, enjoying the protection of taller trees and a fertile soil.

There are two young shrubs in the lower arboretum near the large drift of gunnera, one still in bud, the other with smaller, female flowers. A larger, showier male plant (pictured) is growing and flowering in the Lindsay Creek border near the north bridge in the lower botanic garden.