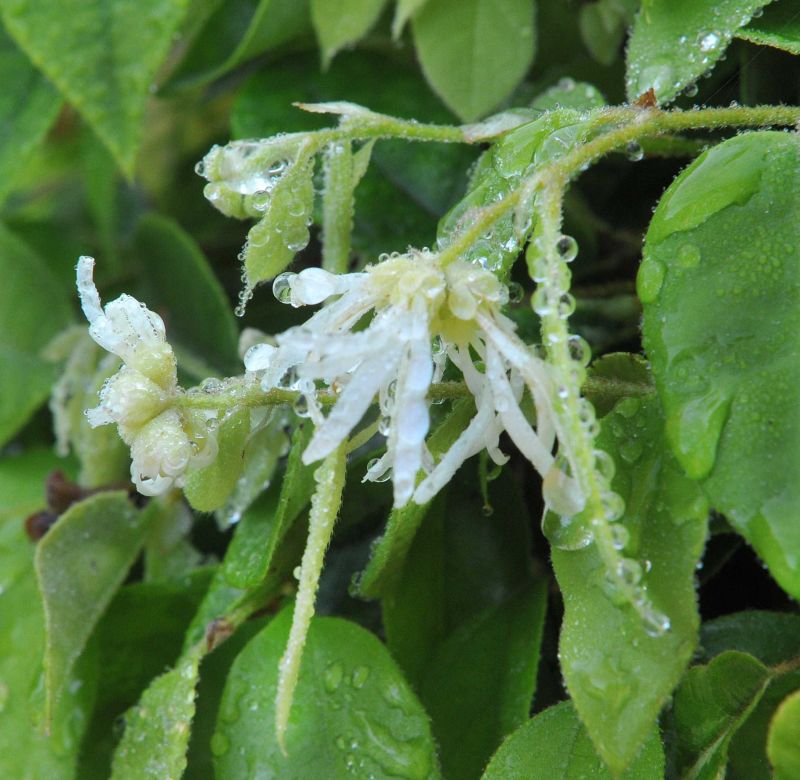 At the south end of the Cherry Walk, in the Rhododendron Dell at Dunedin Botanic Garden, is a sweeping band of mature shrubs. Most are low to medium sized rhododendrons whose mounded growth habit frames the peat garden on either side of it. At one end though are two specimens of Loropetalum chinense whose growth habit matches the rhododendrons, but also offers a variation in texture.

The Loropetalum foliage is thinner but, covered in bristly hairs, is also coarser to the touch. Instead of bell-like flowers, each Loropetalum flower has four strap-shaped white petals, which are multiplied by several buds clustering together, creating a loose tassel effect.

The flowers are like witch hazel and normally appear in late winter or early spring. Similar climatic conditions in autumn can also trigger flowering, as is happening now.

Originating in the milder parts of China and Japan, Loropetalumis said to be hardy to only –5 degrees, but here it has survived -8 largely unscathed. However, in the wild it can reach up to 3 metres’ height, whereas here it has grown to only about 1.5 metres in 26 years. Exposed to full sun, the foliage does tend to fade in midsummer, but as temperatures drop, a healthy green returns.

Loropetalum is in the witch hazel family and although not as hardy as Hamamelis, it has the same requirements of well drained, moisture retentive, acid soil in dappled shade.