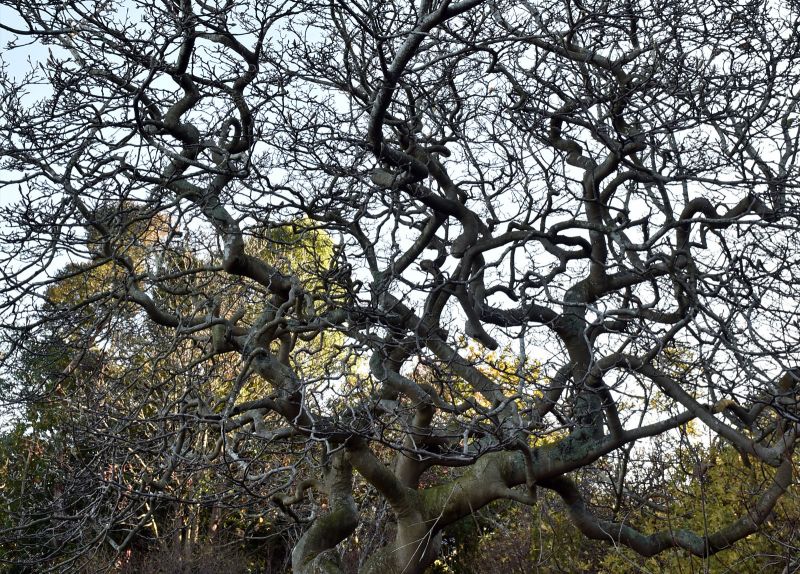 It is not uncommon to hear people say that they don’t like deciduous trees in winter because “they look dead”. I wonder if the same people also object to others sleeping, who after all, apart from the somnambulant among us, are not talking, have their eyes shut and are lying down.

In the same way, deciduous trees may have stopped flowering and dropped their leaves, but compared to a tree that has died, they still emanate obvious vitality. Rather than being blunt and brittle, the ends of the branches are tipped by live buds.  Rather than shuddering stiffly, the branches still sway in the wind, and rather than falling off and leaving patches of exposed wood, the bark provides supple protection for the entire branching system. In fact, without leaves obscuring the view, we can fully appreciate this living framework and wonder at its graceful tracery or strange deviations.

Throughout Dunedin Botanic Garden there are deciduous trees with many different branching characteristics to admire. A good place to start is with the specimens of Magnolia ×soulangeana in the Azalea Garden in the upper botanic garden.

They are shrubby trees about 5m tall with short, stout main stems topped by broad heads of strikingly contorted branches. Despite this wayward looking growth though, the crown is well balanced with evenly spaced branches tipped by soft green buds. Their very sculptural effect is in fact revealed to us entirely as a result of winter’s seasonal unveiling.