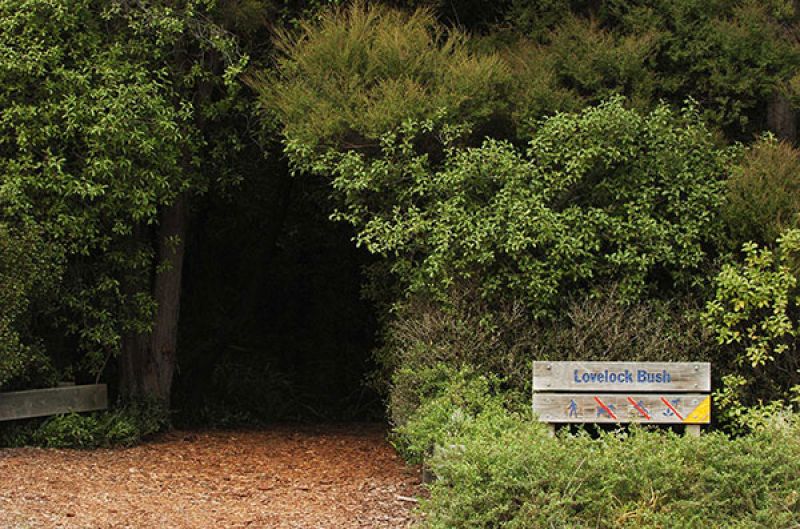 Did you know that about a quarter of Dunedin Botanic Garden is covered in native bush? Like many of Dunedin’s urban forest fragments, the Garden’s bush can illustrate stories of our city’s natural and human history.

Lovelock Bush is a good example. Neighboured by Lovelock Avenue, the Northern Cemetery, and the Opoho bowling club, it has been part of the Botanic Garden since the Garden was established on the site in 1863.

By then, the city of Dunedin had grown rapidly and the podocarp-broadleaf forest that would have once clothed Signal Hill was gone. The land was in a scrubby phase, having been colonised by light-loving kanuka.

Over the decades, as the city and the Botanic Garden developed, the process of succession continued. More than 150 years later, kanuka now dominates the canopy of a healthy, dynamic forest.

The kanuka trees are slowly senescing and being replaced with more shade-tolerant saplings from the understorey. If you look closely, you can spot the diversity of bird and human-planted tree species waiting to shoot into light gaps. There are common broadleaves such as mahoe and pittosporum, and conifers such as kahikatea, miro and matai.

Anomalously, there are also a few well-established kauri, rewarewa and nikau: species native to this country, but not this region. Planted before eco-sourcing became all the rage, they are thriving in the cosy microclimate of Lovelock Bush. They will join the locals as successors to the kanuka, hopefully providing shelter and food for city birds for centuries to come.