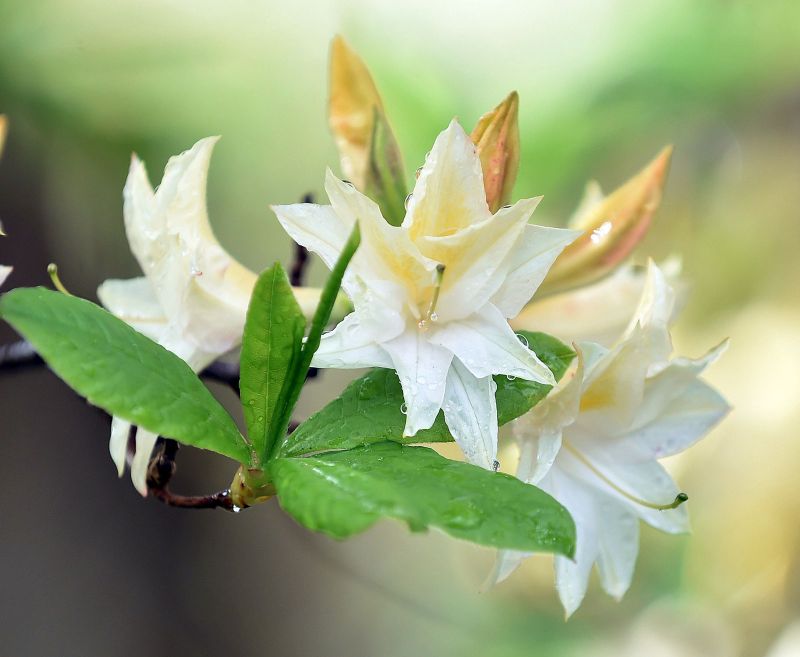 Tucked into borders on opposite sides of the azalea garden at Dunedin Botanic Garden are two azaleas with flowers quite different to those plants around them.

Both have small double flowers with pointed petals. One, pictured with this article, is under the large Magnolia campbellii on the west side and has two tone white/yellow blooms. The other, which for this week will be marked by a teardrop flag, is on the east side and has orange/pink blooms.

Mollis hybrids are a cross between Rhododendron japonicum from Japan and the Chinese R. molle. The Ghent hybrids are bred from the American species R. viscosum, R. periclymenoides and R. calendulaceum plus theEurasian R.luteum. Compared with the Mollis Hybrids, the flowers on the Ghents are smaller, often double and tend to have less fiery colours, but overall are more charming.  They also have better autumn colour and are lightly scented.

Although most azaleas in the azalea garden are Mollis hybrids and only two of the original Ghent hybrids remain, the Ghent influence is evident in Denis Hughes’ Tapanui-raised Blue Mountain azaleas. These are also on display in the azalea garden and several are scented, with two toned double flowers and in autumn, glowing red foliage.  Doug Thomson is curator of the Rhododendron Dell at Dunedin Botanic Garden.