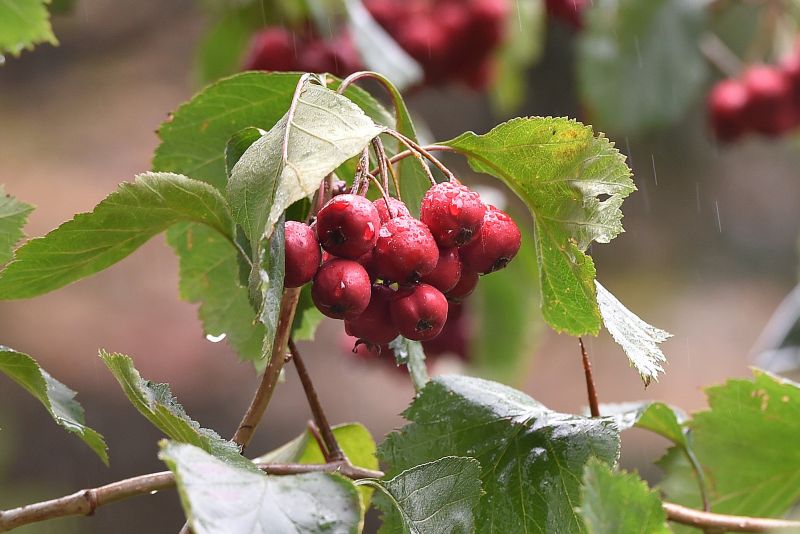 The genus Crataegus contains hundreds of species, all from the Northern Hemisphere, but has developed a bad name due to the invasive European or better-known common hawthorn, Crataegus monogyna. C. monogyna is a common plant throughout Europe and has been introduced to many countries including New Zealand, making a great ornamental stockproof hedge. Some cultivars do not produce seedlings, such as the red flowered hawthorn cultivar 'Paul's Scarlet'. These should be considered as a non-invasive alternative.

Many species are noticed in the spring with their floriferous displays of white through to pink flowers as the leaves emerge. Later in the season they attract attention again as the fruits mature, bringing birds from far and wide to gorge themselves on the bounty.

Attention should be paid to the variation in size and number of thorns each species bears. Some species can have few thorns, such as C. pubescens f. stipulacea, whereas C. jackii has thorns that could puncture any tyre.

Regardless of some species’ deadly nature, all have a place and can make attractive ornamental garden trees in the right locations. Many species are incredibly hardy and drought tolerant, making them ideal for drier locations. Others make great impenetrable barriers, and most species tolerate extensive pruning or shaping.

With a diverse range of species available hawthorns make a great addition to any garden, so come along to Dunedin Botanic Garden and explore the varieties in berry and autumn colour now.