Douglas Fir Grows Up and Down 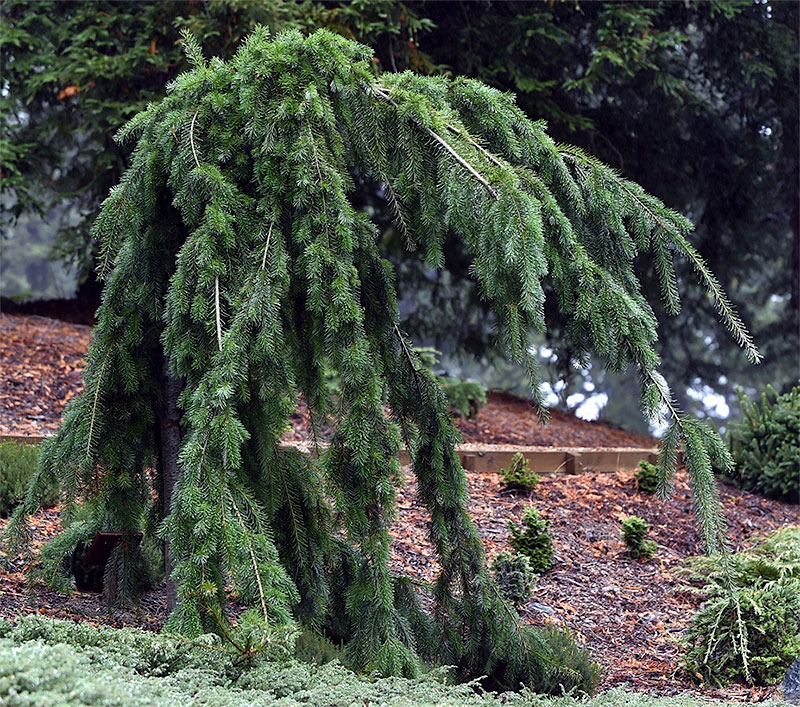 I associate the smell of Douglas fir with Christmas, as it was our annual ritual to prune off a branch from the tree in our back yard. As well as providing us with something to hang the lights on, it helped keep the tree in check. In fact, Douglas fir can reach a height of 100 meters - not ideal for the average home garden. Much more suited are the graceful and more confined pendulous cultivars.

Pseudotsuga menziesii is native to the Pacific coast of Canada, the US and Mexico. It was first described by Archibald Menzies in the early 1790s.  It later became known as Douglas fir after David Douglas collected seed and sent it back to England.  It soon became a favourite garden specimen and timber-producing tree and was introduced to New Zealand alongside Pinus radiata in 1859.

There are two different cultivars growing on the rock garden at Dunedin Botanic Garden:

Pseudotsuga menziesii ‘Glauca Pendula’ tumbles down the creek wall adjacent to the bridge near the café. This cultivar is presumed to have been selected by a French nurseryman in 1891. This particular specimen was planted in 2000 and has had only minor pruning to keep it in shape.

Pseudotsuga menziesii ‘Ruapuna’, pictured, is in the conifer cultivar collection at the far north end of the rock garden. It was grown as a standard, providing height to cascade down from, taking six years to reach the ground.