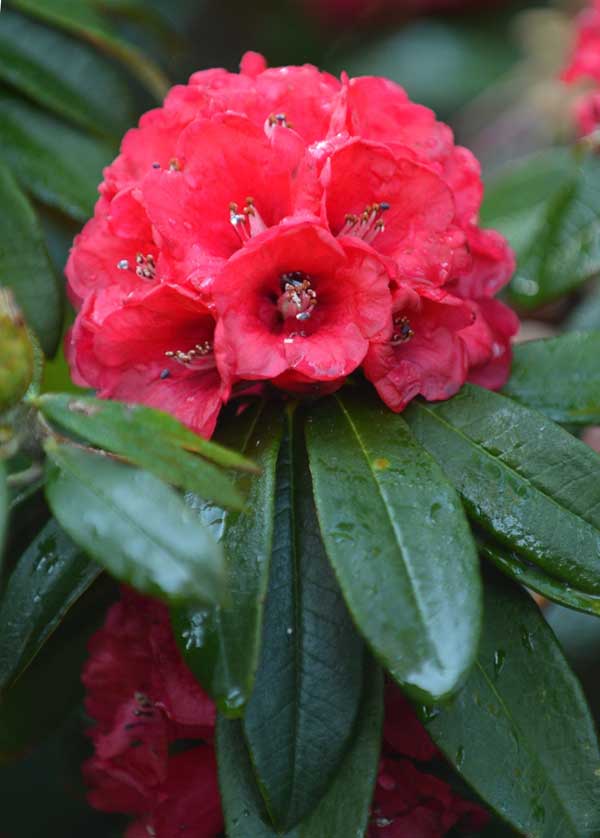 Bursts of colour in the mid-winter garden are always a welcome boost to morale while spring still seems some way off. Amongst the brightest of these are the early rhododendrons, some of which have been flowering since mid-June.

In the Rhododendron Dell at Dunedin Botanic Garden, the Arboreum Walk is the display area for Rhododendron arboreum and several of its subspecies. R. arboreum is so called because it is the most tree-like rhododendron. It comes from the Himalayan region and in the wild can grow up to 30m and.

Rhododendron delavayi is an eastern relative coming from West China, Myanmar (Burma), Thailand and Indo China. In comparison, it only grows to about 9m and flowers much earlier than its western cousin. Whereas R. arboreum flowers from late September into October, R. delavayi can begin flowering in early July, granting us the uplifting effect of its vivid blooms in winter.

There are several specimens of R. delavayi on the Arboreum Walk and throughout the Dell, their tight round trusses glowing like red beacons against the dark green foliage. Walking past some of the taller specimens, you may also be able to glimpse the white or fawn indumentum, insulating and lightening the undersides of the leaves. The stems of the larger plants are less shrouded in foliage so that you can enjoy the texture of their craggy bark.

From now on, more and more rhododendrons will steadily open into flower until the full extravaganza in October.