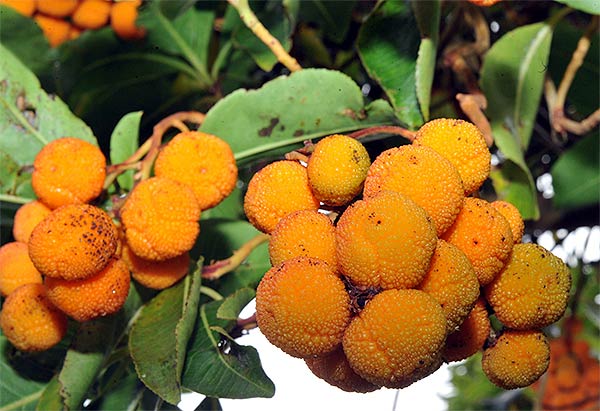 One reason for the existence of a botanic garden is conservation, not only of our own native plants, but to keep stock of other endangered plants from around the world.

The Canary madrone, Arbutus canariensis is one example. Dunedin Botanic Garden imported wild seed from La Oratava Botanical Garden in Tenerife in 1991. These have grown into three mature trees which fruit regularly in the border alongside the top path of the rock garden.

Endemic to four of Spain’s seven Canary Islands, they grow in cloud forest, which is mainly pine and laurel. The remaining wild population is stable but consists of about only 10,000 individuals, resulting in vulnerable status on the “red list” of the International Union for Conservation of Nature and Natural Resources.

A beautiful tree, it has many magnificent qualities. The outer layer of bark is papery and peeling; cinnamon colourings contrast with the smooth, greenish wood underneath. The multiple trunks twist as they grow, further adding to the character.  Glossy green leaves are evergreen, and in early summer pendulous, white, bell-shaped flowers appear in great bunches. These take more than a year to mature and ripen into orange, globular, warty skinned fruit.

The fruit is easily spotted from a distance, demanding a closer look - but just be wary because it drops onto the path and is very squelchy.