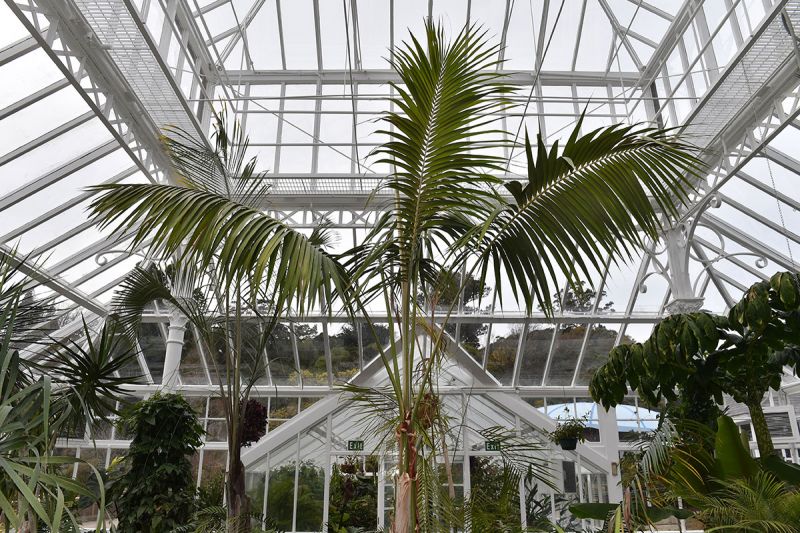 A palm at Dunedin Botanic Garden’s winter garden glasshouse has taken centre stage in the central house’s middle bed.  Howea forsteriana is a fairly slow-growing, solitary palm but usually reaches about 10 metres in height and this particular specimen is displaying some height.

It’s endemic to Australia’s Lord Howe Island so the genus, Howea, is named after the island.  The species, forsteriana, was named after Johann Reinhold Forster and Georg Forster, a father and son naturalist duo who accompanied Captain Cook on his second voyage to the Pacific.

Since the Victorian era it’s been a popular house plant because it thrives in low light, low humidity, poor air quality and low temperatures.  It suits a range of conditions inside and can live for a long time before outgrowing the house.  This specimen was growing in a private residence and had outgrown its space so was transplanted in February into its new home in the winter garden.

Temperatures as low as -5 degrees are okay for brief periods but generally not below 10 degrees, so it grows well in warmer parts of NZ, especially coastal areas.  If you find a suitable microclimate down here this palm could grow outside too.

Tolerant of a range of sunny or shady locations, it can also cope with a variety of soils as long as they’re free-draining.  Let it dry out between waterings to avoid wet feet as root rot can be its biggest killer.