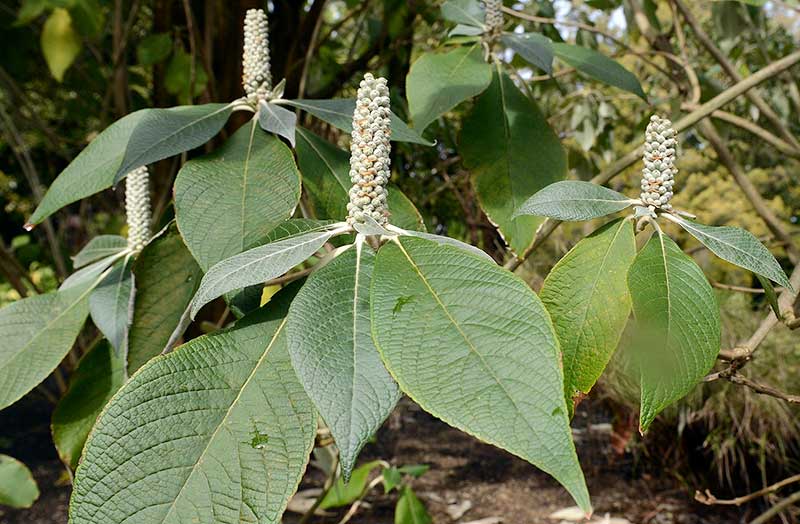 The name of the “Bird’s Coca Cola Tree” makes you think “Why, is the tree fizzy?” The simple answer is no but the name is very apt, describing the darkness of the nectar. It is unusual as trees’ nectar is usually a clear liquid.

Whether pollinators are attracted to the colour is still under investigation. What is true is that Leucosceptrum canum is a great tree for attracting native and exotic birds alike as, even though the flowers are not very showy, birds love the nectar without huge amounts of advertising.

The only species in the genus, Leucosceptrum canum rapidly grows into a large shrub or small tree. Growth can be up to two metres a year but, if pruned in late spring after flowering, the plant bounces back well. Beware when pruning though as the leaves are covered with fine hairs which give a lovely grey appearance to the foliage, but when brushed off can irritate the throat. Do not let this put you off as the flowers in spring are like little white fluffy bird feeders on the ends of the branches, especially loved by wax eyes, bell birds and tui.

The “Bird’s Coca Cola Tree” is growing in the Himalayan border of the Geographic Collection, in the upper Dunedin Botanic Garden.

Dylan Norfield is Collection Curator of the Geographic Collection and Arboretum at Dunedin Botanic Garden.