Fern Holds Own, From the Wild to the Garden 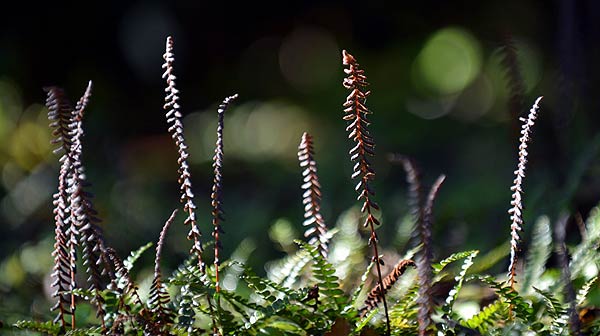 Isn’t this time of year beautiful!   The sun’s low light comes to rest on some of the more understated performers of the garden world, bringing out their charms with grace and subtlety. Nature is slowing down, but beauties like our native little hard fern are holding their own.

The little hard fern’s botanical name, Blechnum penna-marina, is a mouthful, but this moniker tells a story. The species name, penna-marina, describes its resemblance to an amazing marine animal known as a sea pen. The genus name Blechnum tells of its close relationship to 18 other native fern species, each from a unique ecological niche

All Blechnum species are characterised by having two different types of fronds. The sterile green fronds are the photosynthesising parts, and the upright, fertile fronds are the spore-producing, reproductive parts.

Adapted for very specific habitats, some Blechnum species are hard to cultivate, but the little hard fern isn’t one of them. In the wild it grows all over the country, from sea level to high alpine areas. This versatility makes it a very accommodating garden plant.

Blechnum penna-marina will thrive in sun or shade, in most garden situations, except the extremely dry.  A small rooted piece will quickly spread into a thick carpet. In an open spot, it will hug the ground, often showing reddish colours on the new growth. In a shadier spot it can grow to a height of 30cm, and the fronds tend to stay a deeper green.

See it at Dunedin Botanic Garden native plant collection, in the small border just north of the conifers.