Fiery Blooms from the Dragon’s Mountain 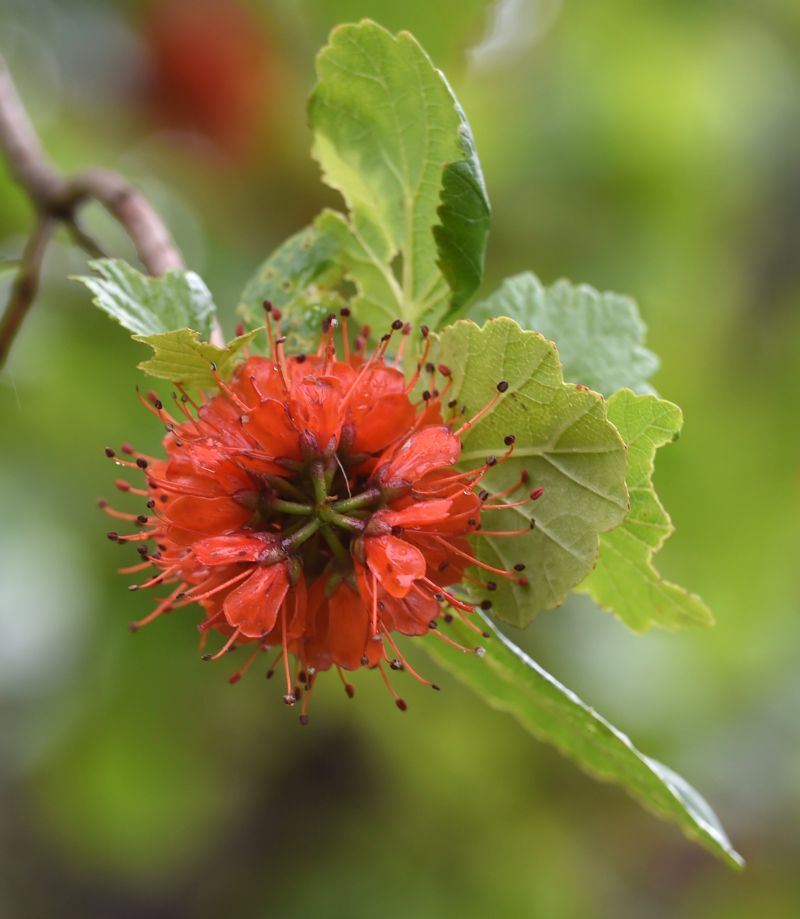 The Natal bottlebrush, Greyia sutherlandii hails from the slopes and rocky ridges of South Africa’s Drakensberg, the Mountains of Dragons. Here, the eastern portion of the Great Escarpment, which stretches for over 1000kms and encloses the central Southern African plateau, is an area rich in plant life.

It is a rugged looking shrub with rough, gnarled bark, whose branches arch to a rounded crown reaching 3-6m in height. The low density wood, which is soft and pale pink, is used to make household implements, and can be planted as a living fence around kraals (stock enclosures), whilst the bark and roots are used in traditional medicine.

Attractively scalloped green leaves, with clearly visible veins radiating from the base, turn shades of red in the autumn, most defoliating by winter. Eye-catching fiery red flowers, contained within bottlebrush-like racemes up to 15cm long, may precede the new leaves of spring.  They can continue to be produced through to early summer. Almost iridescent satin-like flowers with long protruding stamens, like the firey breath of dragons, supply a rich source of nectar enjoyed by tuis and waxeyes.

Relatively hardy, the Natal bottlesbrush tolerates light frosts, some wind and drought times. With well drained soil and good growing conditions it is fairly fast growing, and its small stature and prune-ability make it a suitable plant for even the smallest garden or pot.

Endemic and not threatened in its native home, Greyia sutherlandii is one of only three within its genus, and can be seen with its cousin, Greyia radlkoferi, blooming in Dunedin Botanic Garden’s Southern African Collection.