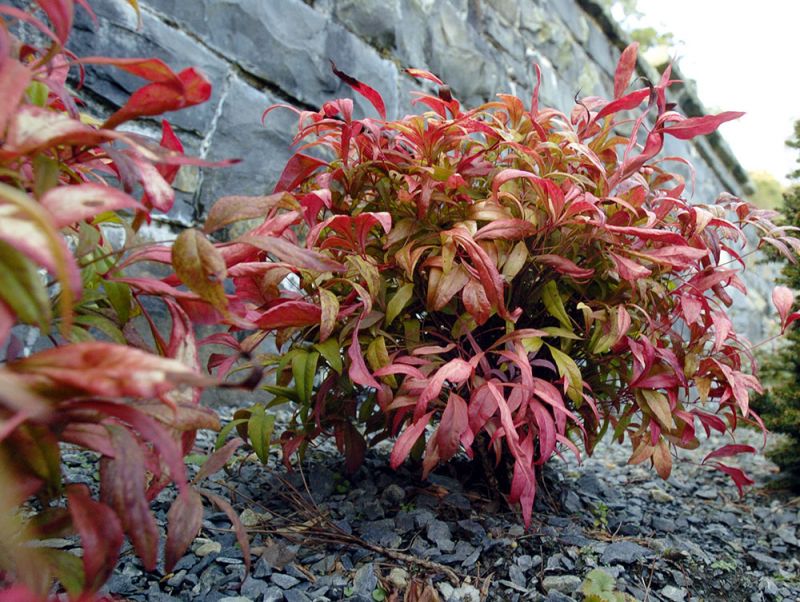 Early morning dew glistens on the eye-catching multicoloured autumn foliage of dwarf heavenly bamboo. In shades of plum, red and green, Nandina domestica 'Nana Purpurea' stands out from the crowd.

As the specific name suggests, Nandina domestica has been in cultivation for centuries, well prized in Japanese and Chinese gardens and often used in floral art. Nandina was taken to London from Canton, China in 1804 and has been widely cultivated in western society ever since.

The only species in the genus, it is native to eastern Asia from the Himalayas to Japan. Japanese call it ‘nanten’ and it was this name that inspired Swedish naturalist Carl Thunberg to give it the generic name Nandina. Alluding to the bamboo-like appearance in its leaves and stems and the reverence given to it by Japanese and Chinese, Nandina is commonly known as sacred or heavenly bamboo. It is however not related to bamboo, but in the berberis family.

Nandina has the tendency to sucker and produce a prolific amount of berries that are spread about by birds. Most of the dwarf cultivars offered in New Zealand do not have these traits but instead have been chosen for their vibrant seasonal foliage.

Groups of Nandina domestica 'Nana Purpurea' (pictured) grow in the north Asian border in the upper Dunedin Botanic Garden and in several spots in the rock garden including at the stone-walled Tannock Seat. Nandina 'Fire Power' can be seen in the rock garden near the steps from the north bridge.