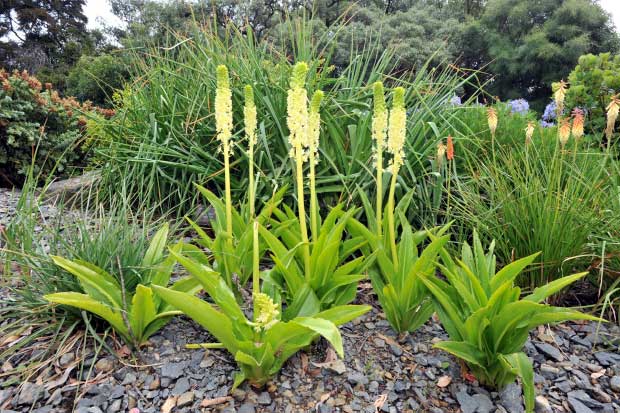 This plant is not a pineapple or a lily, but “pineapple lily” is a good common name to describe the flower of this unusual bulbous perennial.

In summer, a flower spike that is unlike many others emerges from a basal rosette of strap-shaped green or sometimes purple leaves. The spike bears flowers from half way up the stem, topped with what can only be described as a funky hair do.  This tuft gives the plant its Latin name Eucomis from the Greek eukomos, eu- meaning ‘pleasing’ and kome meaning ‘hair of the head’.

At least 8 species of Eucomis are available in New Zealand, from the small Eucomis zambesiaca up to 30cm, to the tall Eucomis pole-evansii which can reach over a metre in height. Most species have green to yellow flowers, but on closer inspection they are often tinged or striped orange or red and rather beautiful. After flowering they have persistent seed pods which lengthen the display right into the autumn.

This tough and easy going, hardy plant likes organic soils in a sunny, open location. Although it can be planted in a container or in the garden, do add extra drainage to the compost as Eucomis dislike persistent wet which can rot the bulb. Propagation can either be from division of the bulbs or seed, but be prepared if growing from seed to wait up to 5 years for flowering.

Eucomis can be seen throughout the Southern African Garden at Dunedin Botanic Garden.

Dylan Norfield is the Geographic and Arboretum Collection Curator at Dunedin Botanic Garden.