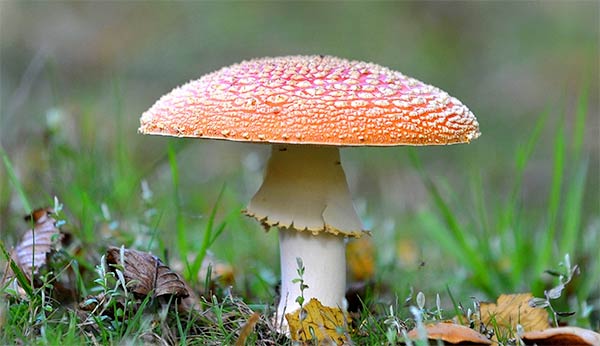 In autumn a clever component of the ecosystem shows its head. Fungus improves life for plants and potentially for people.

Fungi differ from plants in several fundamental ways. Firstly, plants produce energy through photosynthesis, whereas fungi cannot. Instead, fungi derive nourishment from dead plant matter by excreting enzymes to break it down.

Secondly, many plants disperse by seed, whereas many fungi produce microscopic spores that are the main dispersal unit. Some species can release billions in a single day.

Another feature is the main fungal body lies below the soil surface, in a web of cells known as ‘mycelium’. These webs can spread over large areas, making underground connections with host plants. One specimen of the mushroom Armillaria solidipes in Oregon, USA covers nearly 900 hectares, making it the largest single living organism on the planet. This is despite being only one cell thick.

Mycelium transfer moisture and nutrients to plants from areas out of the plants’ reach, in exchange for sugars secreted by the plant. And they go further – in a 1997 experiment one of three trees was covered to simulate the deep shading of a dense forest and to reduce its ability to photosynthesise. Mycelium was detected redirecting sugars from the roots of the unaffected trees to those of the shaded one. The amount of sugars were directly proportional to the amount of shade cast.

Not only plants benefit from fungi. Mushrooms display antiviral and antibacterial properties that, if harnessed, could provide a range of medicines for treating human diseases.