Graceful Flowers for Many Situations 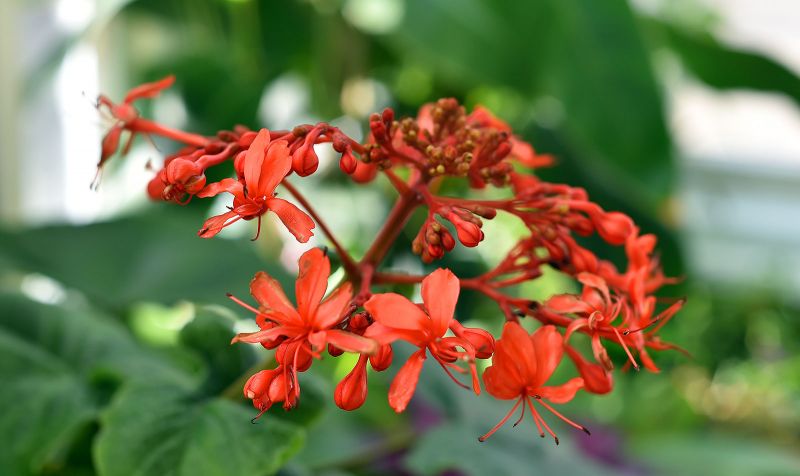 In the cooler southern parts of NZ Clerodendrum isn’t that well known.  It’s a genus of some 400 species ranging from trees and shrubs to climbers.  Found mostly in Africa and Asia, usually in tropical and subtropical regions, some species have an incredible cold tolerance.  Others require protection of a glasshouse but almost all are graceful and scented in flower.

A very showy variety is Clerodendrum trichotomum var. fargesii. This small deciduous tree will eventually reach 7 metres but can easily been pruned back, to restrict size.  It flowers through summer and well into autumn with bright red bracts and small white flowers covering the plant.   Native to western China, this variety will grow in Dunedin’s climate and is growing in the Dunedin Botanic Garden arboretum, above the drive going up the hill towards the aviary.

One that does need glasshouse protection is Clerodendrum speciosissimum, a tropical species of upright shrub that grows to 4 metres.  It has soft, downy leaves and clusters of bright scarlet flowers over the late summer and often through autumn, followed by fruit that turn blue when ripe. See it flowering now in the foyer of the winter garden glasshouse.

The show stopper has to be Clerodendrum thomsoniae.   Known as the bleeding heart vine, it’s a variable flowerer but usually flowers during the summer months.  It has white calyxes with dark red corolla, making it a great plant for Christmas flowering.  This is one to look for next summer when displayed in the winter garden glasshouse.