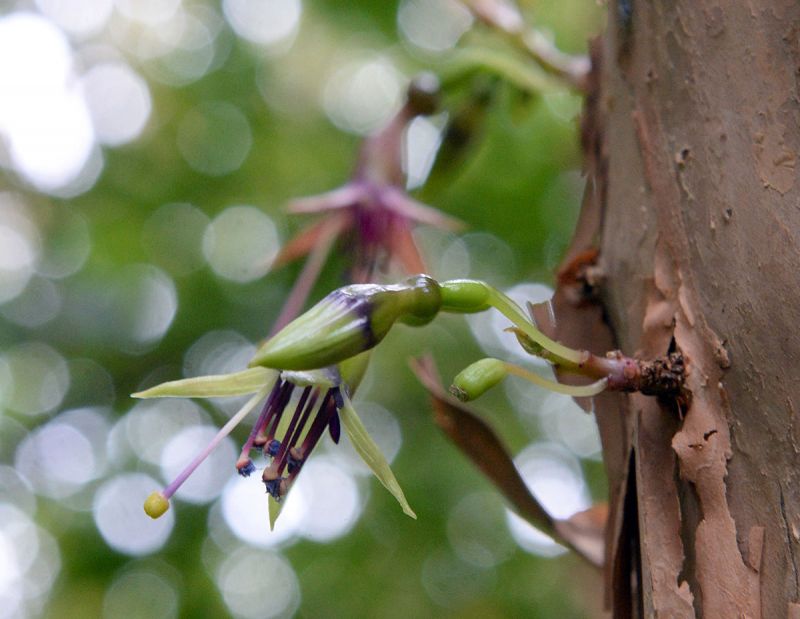 Did you know that the largest fuchsia in the world is native to New Zealand?

Most of the other 100 or so species of fuchsia come from Central and South America, where they are pollinated by hummingbirds. The shrubs commonly grown in kiwi gardens are often sterile hybrids, bred for their flamboyant flowers.

Their distinctive orange-brown wood is resistant to fire, as anyone who has tried it on their log burner will know. The peeling orange bark and twisted, gnarled growth give kōtukutuku their distinctive character. Even more striking in winter, the kōtukutuku is one of the few deciduous natives in our flora.

Waxy purple and green, gradually turning red with age, the flowers of tree fuchsia are borne singly or in clusters not just among the leaves but also straight out of the major branches and trunk. This unusual feature is known as cauliflory. Uniquely, they also have blue pollen, which you may notice decorating the head of a tui or bellbird.

Birds help distribute the many seeds, which will be produced throughout spring inside juicy-looking, dark purple fruits. These berries, known as kōnini, are tasty to humans too.

Right now around Dunedin Botanic Garden and local bush areas these plants are at a lovely stage with fresh leaves and flowers just beginning to emerge.