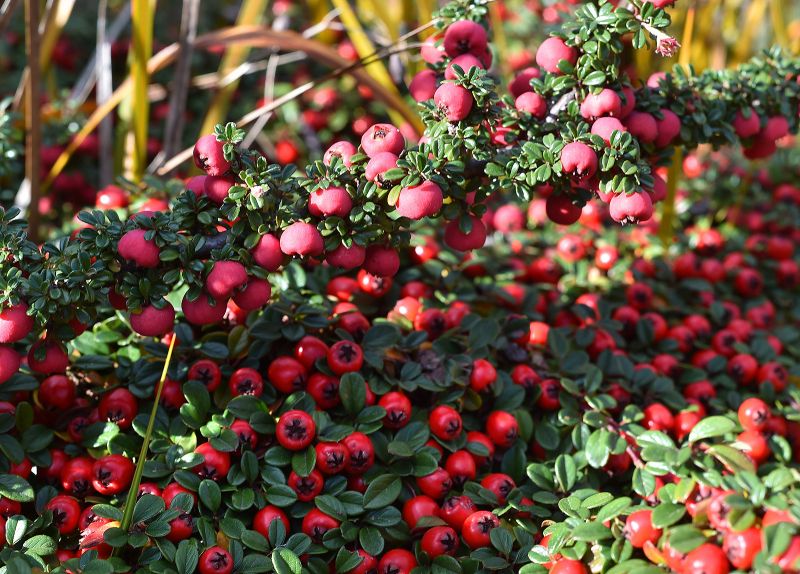 Often over looked until the flowers are swarming with bees or berries form, Cotoneaster can be very useful in the garden for growing in challenging soils and conditions.

In the rose family, Cotoneaster is closely related to other berry-producing plants such as rowan, firethorn, hawthorn, and photinia. The plants range from prostrate to large upright shrubs, some with gorgeous autumn foliage, and others evergreen, all with stunning red to black coloured fruit.

Native to the northern hemisphere through Asia, Europe and North Africa, Cotoneaster are very hardy and will cope with most soil types.

Bees and butterflies love the nectar produced in the small flowers which are produced prolifically in spring and early summer. Seed is dispersed by birds that feast on the autumn and early winter berries.

The origin of the name Cotoneaster is interesting, translating roughly as ‘resembling a quince’. Must have been someone with an imagination, as although the berries are kind of quince shaped, they are less than one centimetre in diameter and a completely different colour!

There are many species of Cotoneaster grown in the Dunedin Botanic Garden, mainly in the Geographic Borders and the Rock Garden. Two evergreen prostrate species are growing intermingled below the stonewalled Tannock memorial seat on the rock garden: Cotoneaster x suecicus (C. dammeri x C.integrifolius) with pinker berries, and C. integrifolius with smaller bright red fruit. Further interest is provided by the stunning orange winter colouring of the sword-like leaves of Libertia perigrinans growing up through the shrubs.