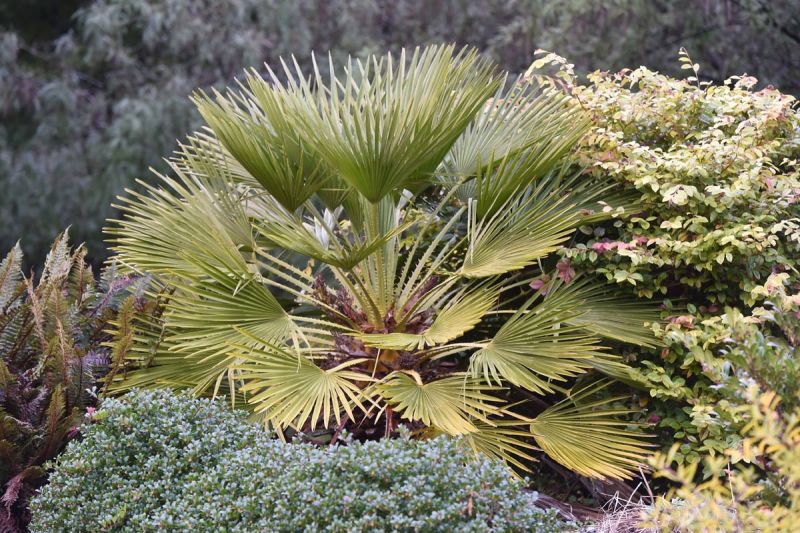 There is only a handful of palms hardy enough to survive Dunedin winters. The Mediterranean or European fan palm, Chamaerops humilis withstands salt winds, poor soil, drought and frost.

Sometimes growing to four metres tall, this dwarf fan palm is usually multi-trunked and clumping.The botanical name alludes to the fact it is bushy: chamae - on the ground, rhops – bush, and humilis- low growing.

The large leaves, rounded and deeply cut into linear segments, are very similar in shape to another hardy species, the windmill palm, Trachycarpus fortunei.. The leaf stalks carry many very unforgiving spines which angle towards the top of the leaf – thick long sleeves and gloves are essential when weeding around or pruning off old leaves. The fibres inside the leaves are very tough and used for making brush heads and small woven items.

Short rigid panicles of tiny yellow flowers are produced on mature plants and are followed by small green bead-like fruits which ripen to an orange-brown.

The Mediterranean fan palm makes a great architectural statement in the garden and will also grow very well in a large container.

Very slow growing, the specimen at the southern end of the rock garden at Dunedin Botanic Gardenhas reached only 1.5 metres high after about twenty-five years and is showing no signs of clumping. There are also three much younger plants growing in the Mediterranean Garden, below the terrace.