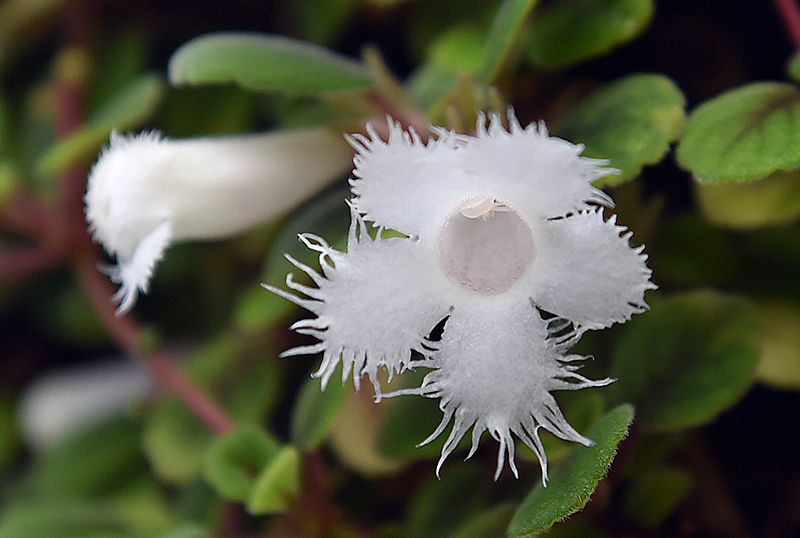 Alsobia dianthiflora is one of those great little plants that seem to just keep on flowering.  Generally starting in spring, it is still flowering at Dunedin Botanic Garden well into autumn.  Alsobia has dainty white frilled flowers that look as if they have been somewhat shredded, poking out from amongst the foliage.

Native to Mexico and Costa Rica it is best grown as an indoor plant or house plant here in Dunedin but it will tolerate temperatures down as low as 4 degrees Celsius or cooler.  It is a perennial with reddish stems and soft, downy, deep green, succulent leaves, often with reddish veins which are very prominent on the back of the leaf.

The leaves don’t like water sitting on the leaves so it is best to water early in the day so water has time to evaporate off or water from beneath, as you would with African violets to which Alsobia is closely related.

Alsobiadianthiflora look great with their foliage trailing over the side of a pot so hanging baskets are ideally suited to growing Alsobia where the foliage can hang well below the pot, covering it entirely.

Alsobia dianthifolia likes bright light but not full sun from the hottest part of the day.  It is an easy care plant that likes a free draining soil which is able to dry out a little between waterings and can even handle some times of drought.

See it in the winter garden glasshouse in a hanging basket above the fish pond.