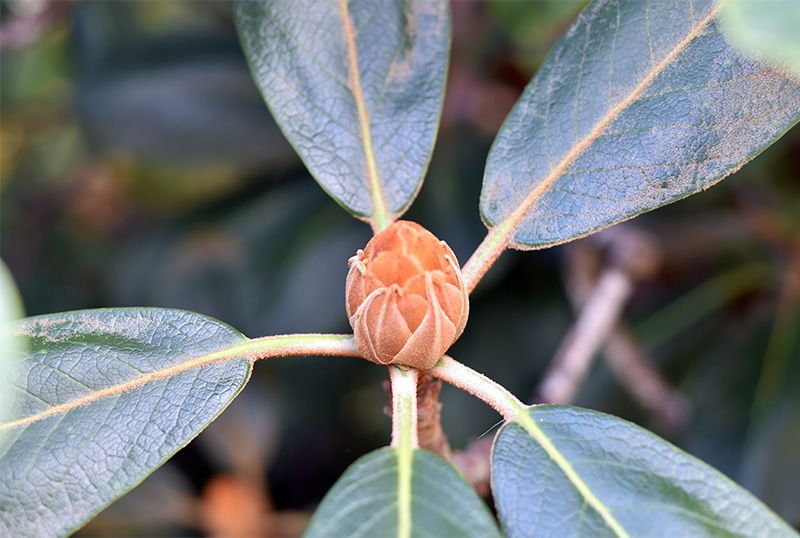 Spring may be the prime time to visit the Rhododendron Dell at Dunedin Botanic Garden, but changing seasons bring their own rewards. Delightfully, the large specimen of Rhododendron falconeri by the south west exit from the Azalea Garden, has covered itself in flower buds again.

Large leaved rhododendron species such as R. falconeri, are normally cyclic in flowering because the energy they spend producing their large flower trusses and subsequent crop of seed means they need a rest year afterwards. Then, given a good summer in that rest year to ripen new flower buds, a fresh crop of blooms can be expected to follow. The last time this specimen flowered was 2015, so we would have expected another flowering in 2017. The summer of 2016 though, was characterised by cloud, showers and decidedly average temperatures. Therefore without adequate sunshine to ripen the buds, R. falconeri produced only more leaf buds. Now, after two years’ rest and an exceptional summer, virtually every leaf whorl sports a flower bud.

Naturally, anticipation of a great flowering display underlies much of the delight at their return but the buds are ornamental in their own right. As large as golf balls, covered in a layer of rich, reddish brown hairs, they could be mistaken for exotic fruit. Underneath the hairs, overlapping bud scales add subtly attractive patterning and texture contributing to their allure and making them temptingly tactile.

So although spectacular spring flowering is the destination, let’s also enjoy the journey.