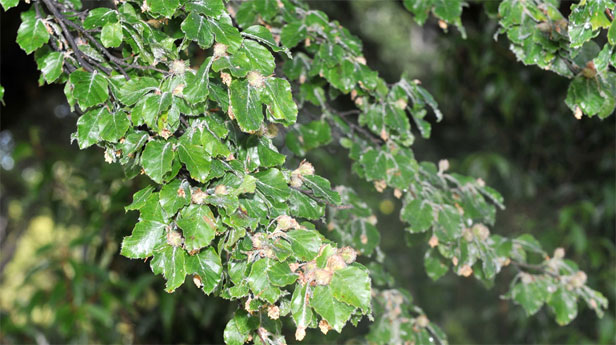 European beech, Fagus sylvatica are wind pollinated and have separate male and female flowers on the same tree.  At the moment the ground underneath the beeches, is strewn with the discarded male flower heads.  Their function of releasing pollen has been completed.  En masse they’ve created drifts of soft beige fluff and up close each head is made up of a small pea-sized pompom holding out the spent stamens.

Wind pollinated flowers are often less showy in their detail, but these flowers can be interesting too.   Their morphology (features) gives clues about the role of wind in transferring pollen to produce seed.

The female flowers have no petals, are small and green with light brown hairs.  Once the two protruding stigmas have successfully received the wind-blown pollen, the flower develops over 5-6 months into a spiny fruit, enclosing two roughly triangular beech nuts.

Beech nuts are often called beech mast.  About every 5-8 years, rarely two years in a row, an abundant, ‘mast year’ of beech nuts occurs.  This usually happens in years following a hot, sunny and dry summer.  The shiny brown nuts maturing in autumn are edible, though slightly bitter and the hard seed coat makes getting a meal of them a slow food task.

An avenue of mature European beech grows just north of the Castle Street footbridge in the lower Dunedin Botanic Garden.