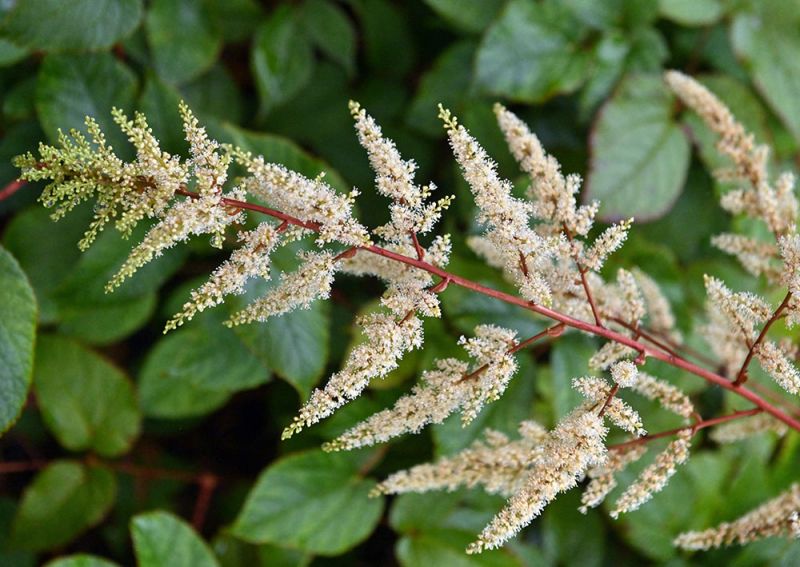 With the passing of mid-summer the pinks, reds and creams of most astilbes in the Rhododendron Dell at Dunedin Botanic Garden have now faded away. One species though, Astible rivularis, from the Himalaya, is just coming into full bloom.

Most species in the genus range in height from 30cm to 1.5m tall and even the hybrids usually only grow to between 70cm and 1.2m. A. rivularis outstrips them all though and can reach up to 2.5m. However, Dunedin’s moderate rainfall plus competition from tree roots in the species border, limit its height to between 1.5 and 2.00m.

The frothy looking yellow-white flower heads are scented and add 50cm to the metre high, coarsely divided, dark green foliage. Earlier in the season, the leaves are a bronzy colour creating an attractive two toned effect above more mature foliage below. The leaf and flower stalks vary from yellow green to reddish, with the red colour being particularly prominent in the flower stalks, which are also covered in coarse bronzy hairs.

Given their height and stature, from a distance they can easily be mistaken for their rose family relation, Aruncus dioicus, currently going to seed in the area just south of the villa beside the azalea garden (the old curator’s residence). However, Aruncus have distinct petals whilst Astilbe rivularis has no petals

So, from leaf emergence to late flowering A. rivularis is a strong performer for any herbaceous border or woodland garden.