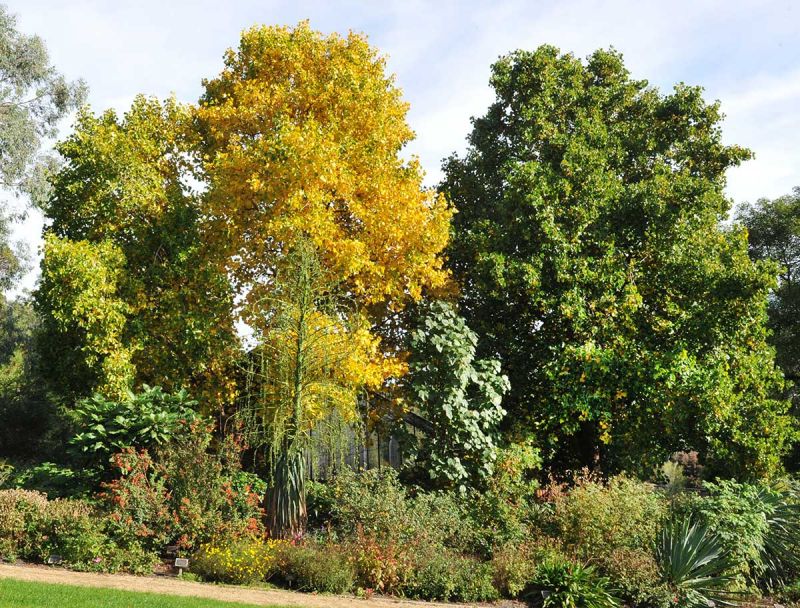 Liriodendron has a beautiful common name, the tulip tree, that conjures up pictures of trees covered in bright red tulips. Unfortunately, even though the flowers are beautiful and do superficially look like tulips, their pale yellow-green colour nestled in amongst the foliage does not make them stand out.

There are two known species of Liriodendron, both making very large trees and primarily grown in parks and arboretums. The North American species L. tulipifera is most widely grown and has a large number of selections and cultivars, all with different attributes. Some particularly good examples of L. tulipifera 'Fastigiatum' are used in Dunedin as street trees along the north end of George Street. L. chinense from China and Vietnam is not widely seen in New Zealand but is equally as beautiful in shape and leaf. Its leaves are larger than the American species and often not as deeply notched across the top of the leaf.

The leaves are the real feature of this tree. Being four lobed, they are easily recognised and hard to confuse with any other tree. In autumn they turn brilliant yellow or a burnt amber colour which on large trees is a dramatic sight.

Unfortunately this is not a tree for exposed sites as the wood is very brittle and branches can be shed in strong winds.

Large specimens of Liriodendron can be seen in Dunedin Botanic Garden near the Rose Garden and in the Mexican border of the Geographic Collection in the upper botanic garden.