Little Plant Coloured all Over 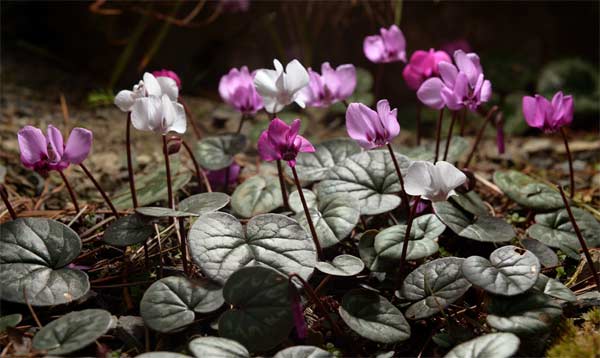 Splashes of pink and white litter the rock garden beds as late frosts continue to glisten. Cyclamen coum is one of the first flowers to emerge in late winter, often as early as July. Joined by bright yellow winter aconites and nodding snowdrops, they continue flowering into spring long after their fellows are spent.

Cyclamen coum is one of the daintiest species in the genus. The whole plant does not exceed 10cm tall, with the flowers held above the rounded to heart shaped, dark green leaves. These leaves are often marked with lighter green or silver-green and are usually red tinted beneath.

Flowers come in various shades of white, pink and crimson, with a dark red or deep purple blotch at the base. Once fertilised, the flower stem twists into a spiral, pulling the developing seed-head down towards the ground.  Fresh seed germinates easily, and can produce a variety of flower colours and leaf forms.

Cyclamen coum is native to mountains and coastal regions of the southern and eastern Black Sea, mountains of northern Iran, and down the eastern coast of the Mediterranean from southern Turkey to Israel. There it grows in shady places in forest and scrub, and sometimes amongst tree roots and rocks.

The plant becomes dormant over summer when it should remain fairly dry to prevent the corms from rotting. These cyclamen are very hardy and will grow in sun or shade, and are easily spotted in several beds throughout Dunedin Botanic Garden’s rock garden.