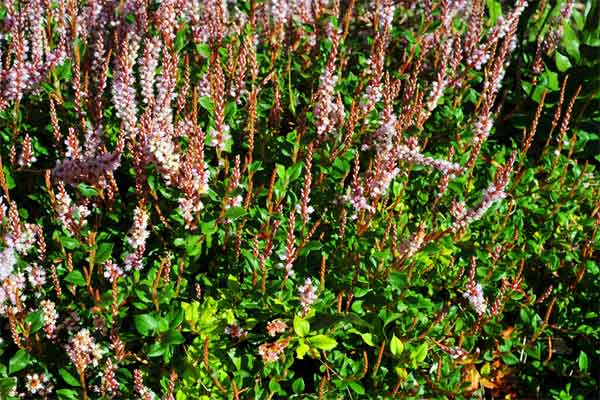 The Himalayan region is home to over 12000 plant species, and many of our favourite woodland plants originate there. These include rhododendrons, primulas, meconopsis and giant Himalayan lilies to name but a few and without them, spring and summer would be much the poorer. Now we are into autumn, the charms of another Himalayan native are on show at the south end of the Sunken Walk in the Rhododendron Dell at Dunedin Botanic Garden.

The splash of rosy-pink scrambling over the log edging are the loosely erect flower spikes of Polygonum vacciniifolium, one of around 200 species ranging from annual herbs to climbers up to 15 metres high. P. vacciniifolium is especially valuable for its long flowering, sometimes beginning in late February and extending into late May or early June. Supporting the flowers is a spongy 15cm mat of intertwining woody stems covered in small dark green leaves. By May the foliage will begin to change colour and eventually turn bright red before falling into the tangle of stems below. The flowers though, will continue on regardless until they finally dry to a rich reddish brown with the onset of winter.

Polygonum vacciniifolium is completely cold hardy whilst a bright sunny position will encourage the best flowering. Coming from high alpine meadows and screes, it prefers moisture retentive, but relatively poor soils. Although it is not a rampant grower, it will certainly spread and if left unchecked can smother smaller alpine neighbours.