Many Seasons Displayed in One 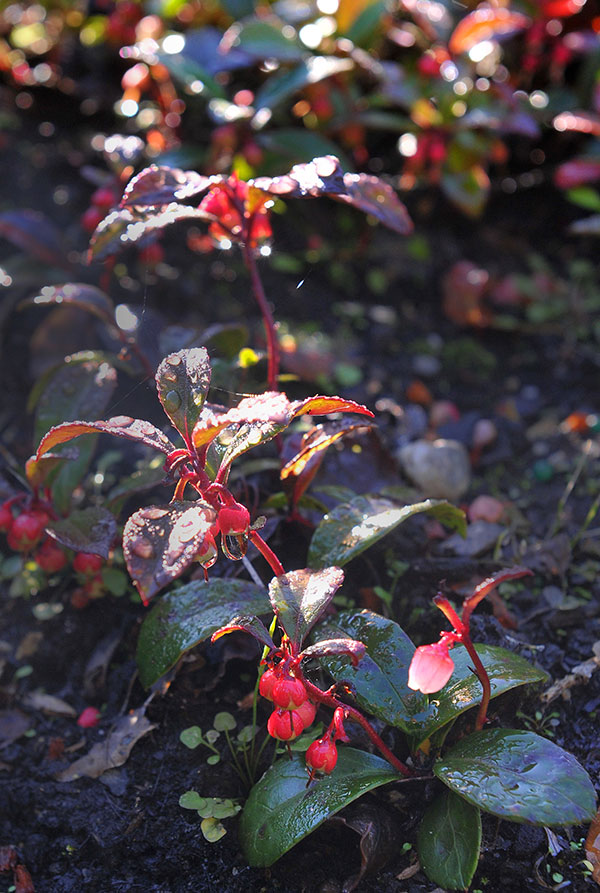 Sometimes, as one season changes to another, some plants can give us a selection of features from both seasons at once.

A case in point is Gaultheria procumbens on the edge of the peat garden in the Rhododendron Dell at Dunedin Botanic Garden. Normally it blooms from mid to late summer but we are still being treated to a scattering of its soft pink to white, bell shaped flowers.

However, some of the earlier summer blooms have been replaced by small, bright red berries as the plant also begins its autumn fruiting stage.

Adding an impression of spring to this seasonal mix, recent warmth and rain have also stimulated more growth which extends the pink-red theme with wine-red new leaves. The new foliage, fruit and flowers all contrast strikingly with the dark green mat of mature foliage that spreads through and across the soil by means of underground rhizomes

Native to woodlands in Eastern North America, G. procumbens is happiest in moist, humus rich, acidic soils, so conditions in the peat garden suit it well. Since the peat garden renovation of 2015, the divisions I planted have gained vigour and are spreading happily. It does prefer more shade than the peat garden offers, but it is adaptable enough to cope. In fact, the lack of shade means that the foliage is less prolific than it could be, so rather than hiding the flowers and fruit, as it can do, the reduced growth allows us to see them more easily.