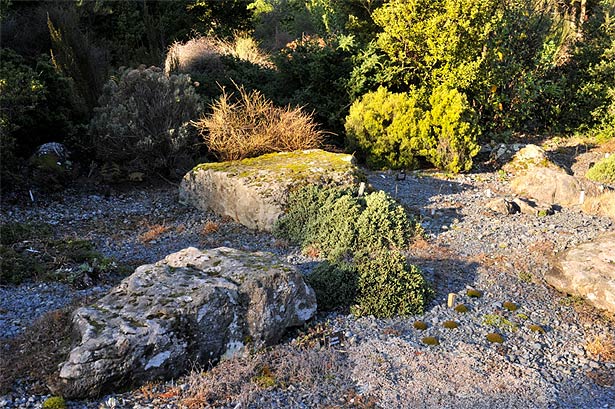 Mountains are wild places.  Extremes of heat and cold combine with a variety of physical conditions such as wet bogs, vertical cliff faces, boulders and dry unstable gravel slopes.  Such variety creates many different habitats. As a result, mountains are home to a diversity of plants.

Most of us won’t see these plants in the wild but Dunedin Botanic Garden offers the next best thing – an alpine scree garden.  But unlike the mountains, the Botanic Garden has a mild, maritime climate.

So the Botanic Garden’s alpine scree garden tries to mimic mountain habitats.   Raised mounds have nooks and crannies with differing levels of exposure to sun and wind.  In these microclimates plants from different habitats live as neighbours.

As well as temperature extremes, the alpine zone has physical extremes.  Steep scree slopes are covered with flat chunks of rock and gravel, constantly on the move.  Walking up them involves literally two steps up then one back, as you slide on loose rubble, back over ground you’ve just covered.  Incredibly, some plants thrive in these conditions.  They have a long horizontal root or rhizome, which travels down to the soil layer, securing the plant in place.  Rootlets then locate water and nutrients.

What about the constant danger or being swept away by scree sliding downhill?  The shoots of some species break off instead, leaving a living rootstock ready to resprout when conditions are right.

The alpine scree garden is in the Native Plant Collection, across Lovelock Avenue from the Botanic Garden Centre.