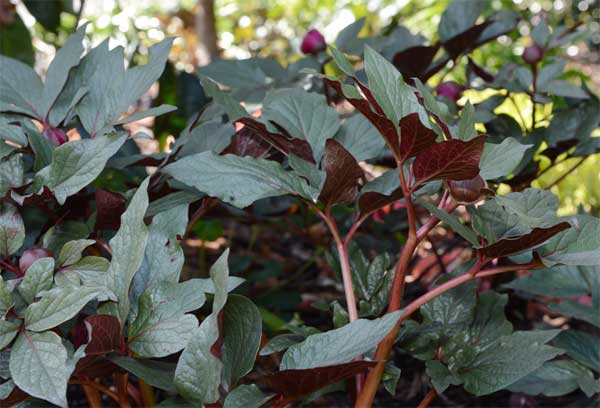 The earliest of the graceful herbaceous peonies have emerged from the ground with a vigour which is truly amazing.  Dunedin weather is perfect for them, with a combination of cold winters and plenty of warm sunshine and moisture for the spring breaking of dormancy.

One reason for the success of this hardy plant is the tuber it grows from.  A tuber is a swollen underground stem, branch or root used for food storage and it helps the plant withstand winters.

Commonly called peony, and botanically called Paeonia, the herbaceous types are grown for their spectacular, bowl-shaped flowers and beautiful foliage which often turns tints of red and copper over the autumn.  Some species also have interesting fruits.

Paeonia cambessedesii has particularly beautiful foliage.  The top surfaces of the leaflets are dark green with a silvery sheen, contrasting wonderfully with the dark reddish-purple leaf surface beneath.  This is the smallest and one of the most distinct species.  The deep pink solitary flowers are a broad open cup, up to 10cm across, well designed by nature to harmonise with the foliage.

Paeonia mlokosewitschii, sometimes called “Molly the witch”, can grow up to 1m but is usually smaller.  The foliage is blue-green (glaucous), especially underneath, and the flowers are pale yellow.  In autumn the decorative fruit opens to reveal black, shiny, fertilised seeds against bright crimson, hollow, infertile seeds.

Herbaceous and tree peonies grow throughout the camellia collection in the lower botanic garden and Rhododendron Dell in the upper garden.