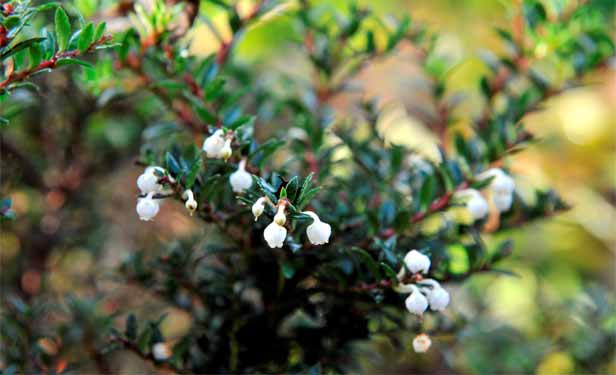 Spring flowering plants can occasionally throw out a few blooms in autumn and one doing that quite regularly is Gaultheria mucronata. These unseasonal flowers are not enough to deplete next spring’s display, but are welcome as an unexpected curiosity.

In the wild this plant grows in Chile and Argentina amongst the forest understory so is well suited to the woodland garden. The peat garden in Dunedin Botanic Garden’s Rhododendron Dell is an ideal spot for it. It spreads slowly so is a good choice for growing with smaller rhododendrons and other low growing shrubs. It does have a tendency to grow through the soil and pop up some distance from the main clump, but as long as you keep an eye on this it is easy to control. The one in the peat garden was planted in 1994 but by removing those random shoots I have confined it to a 2m patch on the edge of the path.

Interestingly, most plants of G. mucronata, although having both stamens and stigmas, are effectively only female and will not produce fruit unless a certified male plant is present. That is the case with the one in the Dell, although the lack of fruit is, to some extent, compensated for by the colour of the younger shoots. Their wine red stems and dark green leaves go together beautifully whilst the pure white flowers appear singly in the leaf axils at the end of the shoots and contrast the darker colours below.