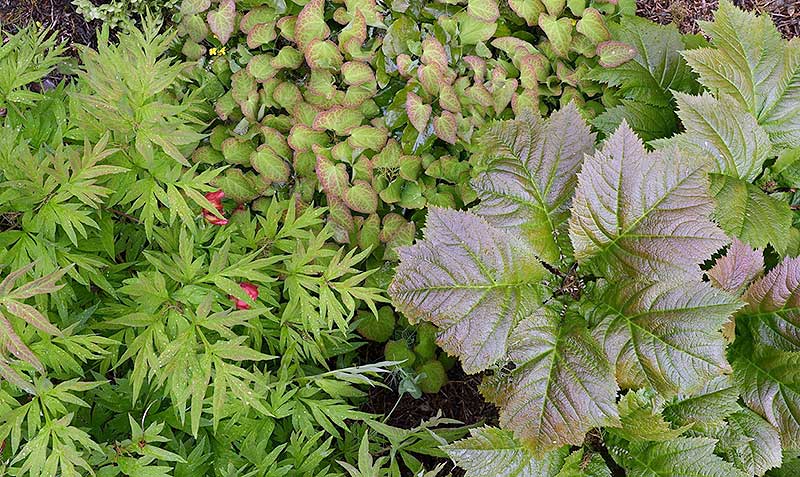 Recently a visitor to the Rhododendron Dell at Dunedin Botanic Garden remarked in amazement at the colours, “Man, it’s like a rainbow fell to the ground.”  Although he was referring to the profusion of rhododendron blooms, the green back drop of foliage is just as much a part of the spectacle. Greens in the landscape are not only restful on the eye but also enhance the brighter colours, making the whole visual experience much more gratifying.

New spring foliage brings a wealth of variation in both shade and texture. The variations can be striking or subtle and can be brought together in combinations that emphasise differences or highlight detail.

One combination in the Rhododendron Dell ‘s Peony Border does both. The bold, almost triangular leaves of Rodgersia podophylla are similar in size, but contrast with the deeply divided leaves of Paeonia delavayi  just beside it. In turn they both contrast in shape and size with the smaller, heart-shaped leaves of Epimedium ×versicolor 'Sulphureum'. The new leaves of the Rodgersia emerge reddish copper and fade to green with bronze tones and this same tinting is picked up by the young peony foliage which otherwise is a much lighter green. The Epimedium foliage also links beautifully into this colour scheme. Bright green veins appear etched into a wine-red background until the red fades out to the margins before disappearing completely once mature.

Although more subtle, the combination is captivating and just as precious as blockbuster colour in the landscape.