Rhododendron Peaks in Middle of Winter 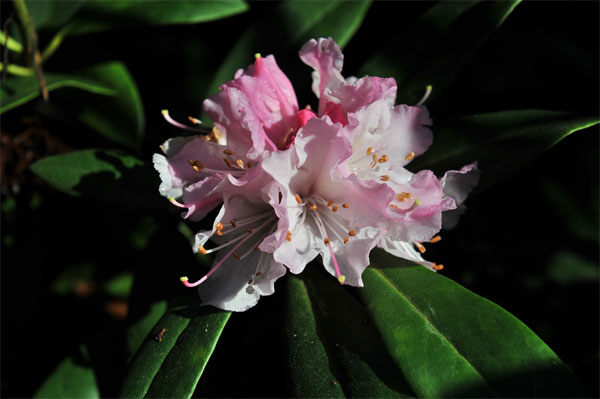 When rhododendrons reach peak flowering in October, they are so spectacular that everyone notices. As the spectacle falls away in November though, it can create the impression that the rhododendron flowering season is quite short, whereas in fact, rhododendrons start flowering now with the well known old hybrid R. ‘Christmas Cheer’.

Rhododendron ‘Christmas Cheer’ is a hybrid of the species R. caucasicum which, comes from the Caucasus and North East Turkey. It is happy in full sun and relatively dry conditions and has passed some of this tolerance to its progeny, although the foliage may fade a little with excessive sunlight.

R. ‘Christmas Cheer’ is easy to grow and has a good rounded habit, with a typically rhododendron shade of mid green foliage. Compared to many rhododendrons the blooms are comparatively small for the size of the plant, but they compensate for that with a reliable and long flowering season, starting now and continuing into September.

Its name refers to the fact that in the UK, it usually begins flowering around mid January to February, but in mild districts can flower in late December. More specifically, the name came from the practice of potted specimens indoors being forced into flower early so that people could enjoy the blush pink blooms opening and changing to near white over Christmas.

In the Rhododendron Dell at Dunedin Botanic Garden, there are two specimens, one at the south west exit from the Azalea Garden and one at the bottom of the gravelled steps in the lower Dell.