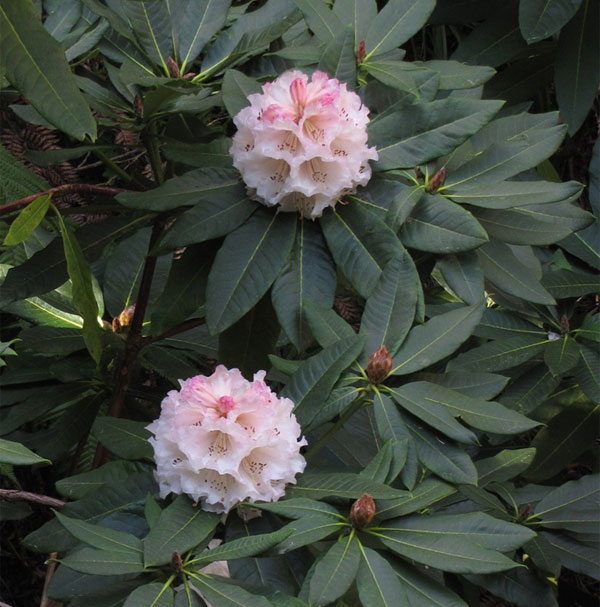 Early spring is the time to catch the majority of large leaved rhododendrons in flower.

Once temperatures start to warm even slightly in early August, the buds of these temperate rain forest giants begin to swell.  By mid-September you can admire their pineapple sized flower trusses in several areas around Dunedin Botanic Garden’s Rhododendron Dell.  Each truss carries from 20 to 30 florets and, depending on the species, can be coloured cream, yellow or pink, often with a splash of red or maroon in the throat.

This year’s show is led by species such as R. magnificum, R. protistum, R. grande,and R. macabeanum. The latter two can carry on flowering into mid-October.  Last year they were followed by the later R. falconeri which can continue into early November.  This year R. falconeri is havinga year off, so rather than enjoying its blooms we can anticipate the appearance of its felted new growth.

Along with the species, some of the large leaved rhododendrons in the Dell are hybrids and flowering right now is a New Zealand hybrid raised at Pukeiti Garden near New Plymouth. Rhododendron ‘Ina Hair’ is a R. macabeanum hybrid whose compact trusses open dusky pink in the bud and fade to cream with dusky pink spots in the throat of each floret.

This year it is flowering for the first time after 9 years and the south bridge in the Rhododendron Dell gives the ideal vantage point for viewing its inaugural blooms.