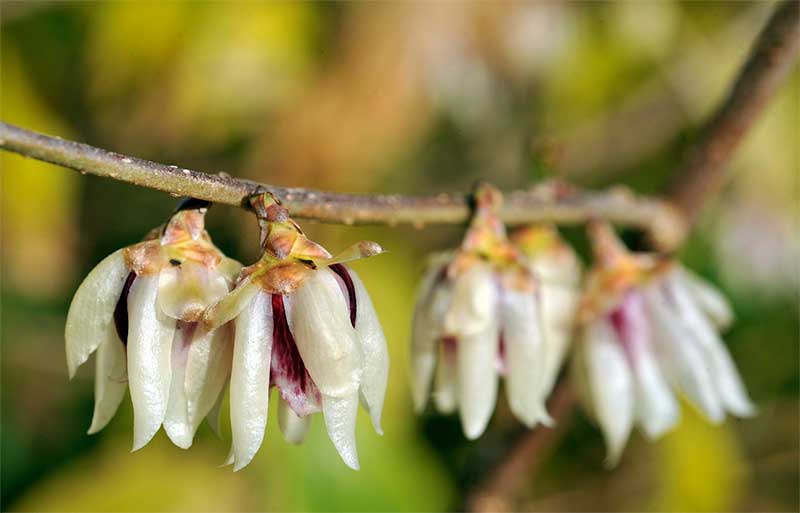 Remember our long hot summer? So does Chimonanthus praecox, which although it flowers in winter, needs hot sun to ripen its wood for good flowering.  The pay-off for all those sunny days is the delicious fragrance of winter flowers, reminding us why the common name of wintersweet.

The oval leaves of Chimonanthus look fairly mundane, although they do have a distinct pointed end. If you crush them, they emit a faintly antiseptic smell and much research has been done, particularly in its native China, into the plant’s medicinal, particularly anti-fungal, properties. The flowers are used by the Chinese as a remedy for measles, coughs, tonsillitis and pharyngitis.

In a garden it forms a tall dome up to 4m, which throughout the year tends to blend into the background.  But by mid-July the scent from pendulous flowers fills the air, and prompts closer inspection. Each flower has two sets of narrow petals, the outer ones almost translucent and the inner ones shorter and maroon in colour.

In Dunedin Botanic Garden’s Rhododendron Dell, Chimonanthus is at the front of a north-facing border, giving it the warm sunny position it needs for reliable flowering. In colder areas, it can benefit from radiated heat if planted in front of a north facing wall. Smaller specimens grow through the Botanic Garden - in the upper garden in the Geographic Collection’s Himalayan border and in the lower garden’s Thematic Scented border, behind the bandstand in the Clive Lister Garden and also the border beside Lindsay Creek.