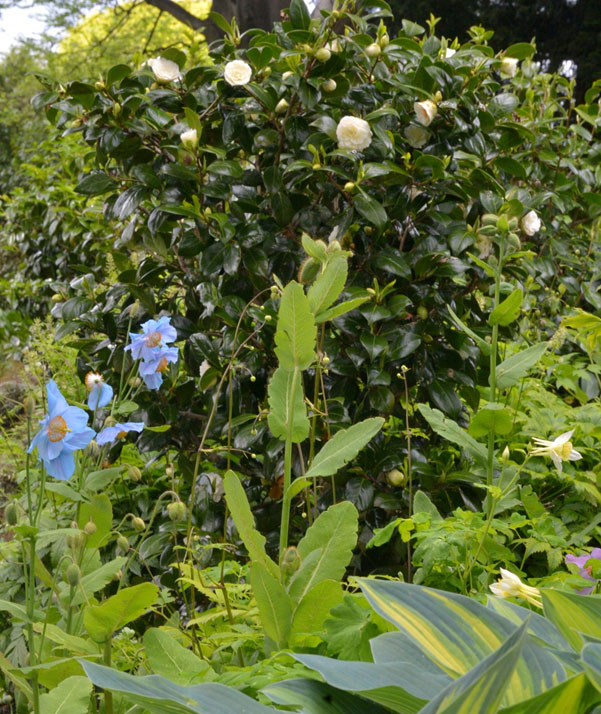 In Dunedin, camellias flower over seven months of the year, starting in May with the group commonly called “sasanquas”. Over winter they provide colour and fragrance, as well as attracting the native tui and bellbirds.

From September to October, with a great cacophony of colour all the “japonica” and “reticulata” groups come in to flower, 'peaking' in late September.

Today, there is still plenty to see and the late season camellias are enhanced by the vigorous growth of herbaceous groundcovers. These provide a host of options to create extra depth with colour and contrast.

Camellia 'Rendezvous' is a late flowering cultivar with bright red petals interspersed with brilliant yellow stamens. At Dunedin Botanic Garden it is growing between the lemon flowering speargrass, Aciphylla dieffenbachia and drifts of the large quilted leaves of Chatham Island forget-me-not, Myosotidium hortensia, with their sky blue flowers.  The combination has good contrast of textures as well as colour.

Camellia 'In the Pink', not unsurprisingly, pink, is a beautifully openly structured camellia.  Combined with underplantings of the bluer than blue poppy, Meconopsis betonicifolia, it captures the lilac behind the blue in any lighting.

If you can't visualise all these plants from their botanical names, come down to the lower botanic garden camellia collection to discover the late flowering camellias enriched by drifts of underplantings.