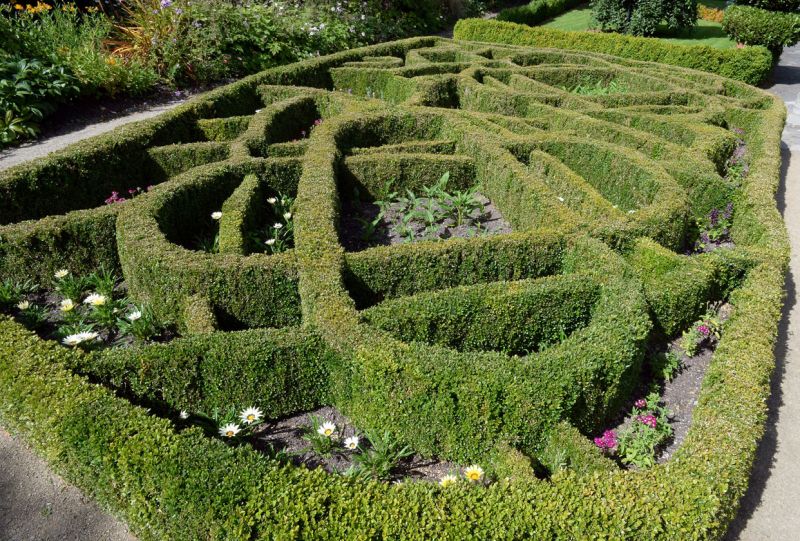 The knot garden at Dunedin Botanic Garden is an example of one of the oldest fashions in ornamental horticulture.  It was popular in the middle of the fifteenth century in England and France, particularly in the Tudor period. The style fell out of fashion when the more complex, colourful and larger parterre gardens, with their separated beds, became popular, leading to the destruction of all known examples of traditional knot gardens.

In the Victorian period the knot garden again came into vogue, with many large homes having an area set aside for formal designs. Recently the restoration of historical gardens and the uncovering of old plans has led to this old design re-establishing its place in history.

Knot gardens were originally constructed using plants such as Teucrium mixed in together with bushy forms of thyme to contrast and highlight the differing ‘threads’ of the knot.  Box, now the most common plant in knot gardens, was not used as the odour given off by box when cut was considered too unpleasant. The original knots would have been simple designs surrounded by gravel or grass as the bushes themselves were considered the feature, without the need for bedding.

The design of the knot garden at Dunedin Botanic Garden is based on the Shakespeare garden in Stratford-upon-Avon in England.  Enter the botanic garden through the main gates and turn left.

This impressive and intricate style has lasted over five hundred years; hopefully some horticultural styles we develop now will have the same lasting impact.